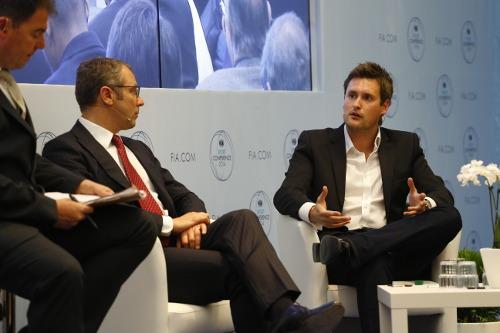 This is a transcription of a short interview between Mike Coraluzzi of MotorSportsCareerAdvisor.com and the Press Officer at FIA Formula E Championship, Tom Phillips.

Mike:  Tom, can you tell us a little how you started out on your journey into motorsports; a little bit of the background?

Tom:  Well, I’ve always been a motorsport fan since I was a little boy.  My whole family has always been interested so it’s kind of always been in my blood, anything with four wheels!  But my career actually started in journalism.  I wanted to be a writer and after three years of working as a journalist and doing a lot of work on test drives and motoring articles, I moved into public relations and into motorsport.  I began a bit like a driver.  I started at the bottom of the ranks and I slowly moved my way up to the top, moving from different championships, bigger and international championships, mostly open wheel championships.  I did things for Formula Renault which is fairly big in the UK and Europe, moving onto Formula 2, which was a feeder series to Formula 1 and now Formula E, which is a new electric championship.

Mike:  Pretty cool.  I didn’t know that you started out in journalism.  There’s a lot of different areas in motorsports to participate in.  I’m a writer myself.  So can you go back and maybe expand on the advantages of education and some of the personal, I call them success characteristics, that you think have helped you?  So first starting off with education.

Tom:  Obviously, I went all the way through school doing what we call GESCs over here and then A-levels and then after, university.  I left university at the age of 21 with a degree in Journalism and English and I have to say that was very important and helped open up the doors to a lot of opportunities, as is often the case in all sorts of jobs, not just motorsport.

I think education is very important.  It may not seem like it at the time as you’re doing your homework or doing exams or studying for coursework, but it is very important and that certainly gets your foot through the door, as we say.

But I think all of that combines to just having enthusiasm for what you do and the willingness to go the extra mile.  Motorsport is a very competitive industry.  A lot of people want to do the job.  It’s quite a glamorous world and you have to stand out and I think to do that you need good skills and education, but also, just to have that passion.

Mike:  And desire.  Yeah, I mean, it’s good.  And you’re coming from a journalism angle kind of on that same angle too.  It’s good to hear that.  It helps bring reinforce that; that’s what we always emphasize.

My third question, do you have any suggestions for newer job candidates regarding strategy to obtain a good position within motorsports?  Now that’s a very general question, but there’s probably lots of good positions no matter what you’re shooting for, but maybe it ties into persistence; what are your thoughts?

Tom:  I think that’s a very good point.  I think my advice, and again, it could be the same for any industry, is to show that you’re willing by perhaps doing work experience or unpaid work, or an internship.  Maybe just go along to race weekends helping out.  It might not be the most glamorous jobs, it might be quite a lot of hours and unsociable, but it’s the ability to show that you really want to work in that field.  A lot of jobs, and particularly motorsport, it is about who you know and having your face seen at events and showing that you can do the job because a lot of qualifications are not always just on paper, although education is important, it is about being there and being in the right place at the right time.

Mike:  That’s good.  It reminded me; you’ve heard of Woody Allen, a U.S. comedian?  I’ve heard him say “a large part of success is just about showing up”.

Mike:  So that’s kind of what you said.  It is true, you got to get out there and be there and working for free or showing up for free, it shows people that you’re interested.  You’re there and sell them on the rest.

Mike:  What have been some of your biggest challenges as a motorsport professional; some of the challenges and maybe how you overcame them?

Tom:  I think for me, one of the challenges is finding a balance between work and your home life.  Motorsport can be very grueling, particularly, with traveling and working on the weekends.  I mean, the sport takes place on the weekends, so you’re going to have to give your weekends and it could be 10, 20, 30, 40 weeks of the year where you’re away from home, where you’re traveling to another destination.

So I think it is a real challenge to balance that between home life and working life.  I think on top of that, you will come across some interesting people, some difficult characters, maybe more so than other professions and you have to be very professional and overcome that and do your best to succeed.  Those two things can be quite challenging.

Mike:  Hmm.  Interesting.  The traveling, all that, being out on the road, it is kind of perfect for younger folks if they’re going to a tech school or coming out of college, it’s kind of a good time to jump in; you can run with it, at that point.

Mike:  So my next question is what areas in new technologies do you suggest students and newer folks in motorsports pay attention to that could help them in the future; any ideas?

Tom:  Technology, even in my short time has advanced so quickly.  I remember when my mobile phone couldn’t send an email, and the internet was still in its infancy. Twitter didn’t even exist and that’s all in the space of a decade.  It’s amazing how much technology has moved on.

In my sort of industry, the main thing is social media and how quickly that has come about and how important that is now in order to do my job and to communicate messages and to promote championships and to get word out there about what they’re doing and getting engagement from fans; it’s all about social media.  So if marketing and communications is an area that some of your students are looking to get into, then to really be tech savvy on all the different social media tools, platforms, how they work, the strategy behind it, is something that I would strongly advise.

I mean, just another example is Periscope. Just in the first season of Formula E, when the season started, Periscope didn’t exist and after six months, it finally emerged.  All of a sudden you had all these fans and journalists recording races and putting them out on their Twitter feeds and that just came about in the last six months.  Again, it’s another tool that no one knew was going to be here and it’s incredible how quick these things change.  So being on top of all these things, I think, is very important.

Mike:  I mean, we know that, but I didn’t know it’s that prevalent and useful in Formula E; I should know that.

Tom:  I mean, I can’t say on the engineering side, but I imagine that technology has moved on there as well.

Mike:  Sure.  Absolutely.  It’s good to hear.  I’m going to backtrack and condense it all down.  From your experience, what’s the number one trait or characteristic you think will contribute to a student’s motorsport success?  Maybe not number one, but maybe number one and number two success traits they should use to get them where they want to go?

Mike:  Kind of a loaded question…

Tom:  Yeah.  I think probably going back to what I was saying earlier, it’s probably just enthusiasm.  That willingness and ability to go the extra mile, whether it’s education, work experience, working hours; you know, to stand out from the crowd and to show a potential employer, team, an engineer or a manufacturer that you’re excited, that you really want that job because there will be 50 other people that also want it and they may be just as good as you on paper.

So it’s that ability to stand out and have that enthusiasm.  Turning up on a very cold morning to help out at a race meeting or to be packing away tires at midnight when you’ve got to go back to your normal job on Monday morning; all those things just to show that you really want this, I think, really sets someone out from the crowd.

Mike:  I ask that question on any interview I do and no matter what different specialty the guest is, in your case journalism, I get the same answer every time.  I do it on purpose because I know what answer’s coming.  Enthusiasm, focus, it’s all the same because they are the same success strategies for any goal someone’s trying to accomplish so that’s good to hear.

Tom:  Yeah, that’s a very good point; it forms in any form of life.

Mike:  So, how do we learn more about what you do and your website or what you’re involved in?  If you could direct the readers to where to go.

Tom:  Well, I’m currently involved in Formula E.  If people want to know more about Formula E, then there is a website which is www.fiaformulae.com.  I’ll tell you all you need to know about the series, the technology behind it and where the races are.  We had two races in the U.S. in our first season, which were very popular and it’s heading to Long Beach next year, so maybe some people in the area want to come along, but yeah, that’s probably the best way.

Mike:  So how is the technology evolving power-wise, endurance-wise with those Formula E cars?  I mean, has it progressed in the short time that it’s been live or how’s it going?

Tom:  It’s a good question.  The proof in that is going to take a little bit of time before it comes to fruition, but Formula E started last September, and in the first season, all the cars were identical.  But the goal of Formula E has always been to help improve and accelerate electric vehicle technology and one of the best ways to do that is through motorsport and true competition.

So from this season, the teams can start bringing their own technology to the car, so it’s now what we call an open championship.  Testing gets underway actually next week here in the UK before the season starts in October.  And first of all, the teams can start working on the powertrains.  The regulations have opened up to allow them to work on those areas, just for now, and then the regulations will open up as the seasons progress to work on things like the batteries, which obviously, are perhaps the most important part of any electric vehicle.

So yeah, we’re going to see, but from what I’m hearing is that we’re certainly expecting quicker cars for season two, maybe some different sounds.  So it should be interesting to see this time next year when you perhaps compare the lap times and the battery distance they get from race to race and from season to season and just how they’ve improved and then maybe in five or ten years’ time, you can really see the progression of the technology.

Mike:  As I learn more and more and see more, I’m getting more excited about it myself, so very cool.  Many thanks for your time for this interview!