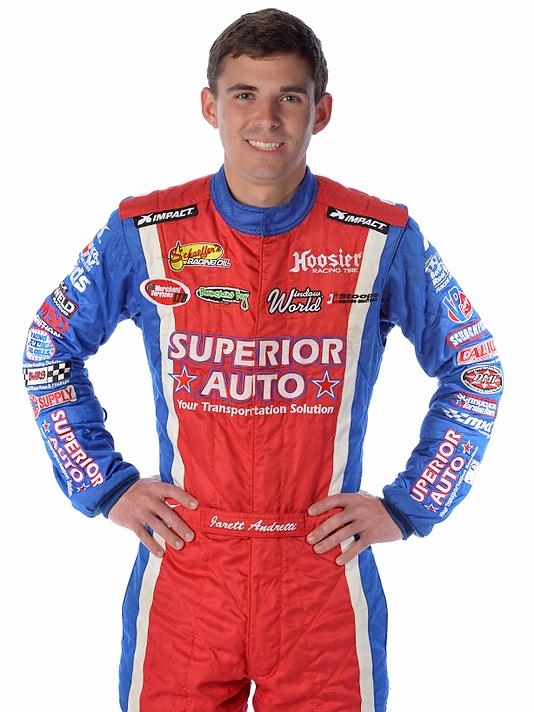 This is a transcription of a short interview between Mike Coraluzzi of MotorSportsCareerAdvisor.com and Professional Race Car Driver, Jarett Andretti.

Mike: So Jarett, can you tell me, how did you start out on your motorsports journey?

Jarett: Well, I guess it was kind of something that in a lot of ways, I was born into. My family has obviously been involved in motorsports. But I actually really didn’t get started until I was 17. I attended a lot of races, traveled around Dad, kind of got the feel for the motorsports industry, but it never was something that really appealed to me to be involved in. And so then Dad bought a go-kart. I was 17, like I said and I was going to go off to college. He had spent a lot of time racing, obviously, and so we hadn’t spent a lot of time together. So he said, “Hey, let’s get this go-kart. I’m coming off the road full-time, I can run and we can look around together and just go out there and play a little bit.” Well, that turned into something much bigger.

Mike: So might not understand or are unaware, who is your dad?

Mike: That’s cool. Yeah, you are born into it. I’m sure it’s in your blood, obviously. As far as education, was there any formal education or what kind of education have you had or is it just learning the ropes as you go along?

Jarett: I mean it was always something when I was younger that I was always going to go college. It was never even like a question whether you went to college or not. I never really thought of it being a choice. Everybody went to college is the way they made it sound like to me. And so when I got racing, it was always I have to go to college and continue to race, which is exactly what my father did. And so I think the advantage is you can speak accurately, efficiently and talk about why people being involved in motorsports is beneficial to their business and what you can do for them, and also, if they say, “Hey, these are the goals I have. I want more business. I want more brand recognition. I want et cetera, et cetera, the list goes on and you studied all those topics in class and you know how to get to there and how to achieve that using motorsports and I think that’s the best way. It helps from the sponsorship side and the marketing side. You can’t really go to class for driving necessarily, but engineering, marketing, all those things apply and so I think that formal education has been invaluable to me.

And I’ve also gotten opportunities because the guys have said, “I can appreciate what you’re doing. You’re going to college, you’re racing and I’ll give you a shot in my car,” and that’s the kind of stuff that people don’t have the college degree, won’t get. And so people appreciate that hustle as well.

Mike: That’s fantastic. That’s really intelligent. When you mentioned, “What can we do for you?” That kind of you as what can we do for sponsors or how can we help you out because we teach that as well, but to hear it from a driver like yourself, that’s great coming from your way. So, on education, you nailed it. Can you go into the personal characteristics that you think could help yourself and your success? What kind of personal characteristics do you think are important?

Jarett: I think one of the things is this business is so difficult, it’s not a 9 to 5; it’s not a 9 to 5, five days a week. It’s something you’ve got to love to do. You’ve got to be engaged in all the time and spending 12 to 15 hours in the shop a day is not uncharacteristic for me and that’s something that’s just normal. I look at it as I quite frankly don’t know what else to do with my time because you get so engulfed in it. I think hard work is probably the main thing and the love of the sport, the love of doing what you want to do.

If you’re in racing because of the money or something else, you’re really in the wrong business because you can make a whole heck of a lot more money doing other things working less hours. It’s something that you have to love what you’re doing. You’ve got to be willing to work hard and you got to persevere. It’s tough to make it here and it’s difficult when you’re so sponsor driven and so money driven and then there’s people here that have been doing it forever and so I think that you just have to be willing to knock on doors. I’ve always been told the squeaky wheel gets the grease and that’s exactly true. So if you’re willing to put in the work and the effort people will take notice.

Mike: Well said. Again, that’s a great answer. That goes right into my next question. We deal a lot with folks coming out of college like you, candidates and you’re a racer but you’ve been around team members and all aspects of it; are there any suggestions for people coming out of college, newer motorsport job candidates maybe regarding a strategy to ultimately attain a good position? I know that’s a really open question. So coming out, any general strategies you could offer.

Jarett: That’s a very difficult question because I have people email me on LinkedIn all the time saying, “Hey, I’m an engineering major at this college. I want to get into Andretti Autosport, how do I do that?” And really, it’s so tough to do. I think the best thing to do and you’re easily able to find out who the head engineers are at these different companies or who an engineer is. I mean like Ray Gosselin here at Andretti Autosport, he was just on TV this past weekend.

I’m sure you can probably call the front desk and say, “Hey, can I speak to somebody in the engineering department about an internship?” Or an email. I just think that if you try to reach out to these people, they understand also because they understand where they came from. It was something where they worked their way up. Everybody needs the foot in the door and then it’s your job when you get your foot in the door and you get established to pass that onto somebody else.  And so I think you just have to work really hard at it is really the main thing. Don’t get discouraged. Call people, knock on doors. I mean, I’ve been turned down for rides hundreds of times, but you only need one to get you to the next level and so I think that’s the way it works.

Mike: Reaching out, persistence, and you mentioned earlier “squeaky wheel”. So it’s all about you got to want to do it and go the extra mile. I get it.

Mike: You’ve been doing this for a while; can you touch on some of your biggest challenges as a motorsport professional personally? You mentioned sponsorship, but what are some of the challenges that you’ve run into and maybe you can overcome them.

Jarett: I think for me, it’s been something where you have a variety of challenges where you’re trying to juggle everything. You’re trying to be not only a driver, but also make sure you have all the right pieces on your cars as the mechanic and make sure it fits together correctly. You have the sponsorship you have to deal with.

So you’re not typically just ever worried about one thing, it’s about being able to juggle multiple things and that’s the way it is in any motorsports career. From an engineer, you’re juggling the mechanics, the driver, and the dynamics of the car. And then same for marketing, you’re juggling sponsors and you’re helping the team. So you’re juggling everything and so I think that that’s the biggest thing that people face when they get into the motorsports industry is how busy they are and how many different people they got to make happy and how many different jobs they need to fulfill.

Mike: That’s a good answer because they have to know what they’re getting into. When you know what you’re facing or going to get into then you’re going to hopefully prepare yourself, so that’s good. Any areas or new technologies you think students or the younger folks should pay attention to today? For example, I know Formula E just came online and we’ve got batteries; what do you think a new technology student should pay attention to coming up?

Jarett: Formula E seems to have all the recipes for a series that can sustain themselves for a long period of time. A series that can be around for my kids to watch like a NASCAR, like an Indycar, or Formula 1™. Some of these series that are in, they’ve kind of flashed in the pan; they’re here for a couple years and then they’re gone. It’s a trend. I don’t see that of Formula E because they have a really nice package, they have an environmental sustainability. They have a goal set and it’s bigger than just themselves; it’s bigger than just racing and competing, although that’s the cornerstone to their series. They’re pushing the technology sector forward more than any other racing series and it provides a benefit that people can obviously make that connection. People that don’t know anything about racing can make that connection to technology in the future.

So I think that if you’re interested in technology, if you’re interested in that kind of vast idea of motorsports, I think Formula E is the place to look. I think that you should pretty much really be looking there. That could be really your first and only stop in the sense that they have a nice schedule. They travel, but they don’t travel strenuously. It’s a 12 race schedule, I think it’s something like that, and it’s like 2 races a weekend so it could be great for somebody starting out and I think it could be great for somebody that wants to build a career there. I know that a lot of the parts and pieces made here at Andretti Autosport go to Formula E because the rules packages are open, there’s more creativity involved and so that opens up job opportunities for people that are special.

Mike: I didn’t realize that. Yeah, it’s new to everybody, but you’re right, I believe it is the future, obviously.

I have one last question. You’ve done so well on all the rest. If we could backtrack everything here and just condense it all down, I’m going to put you on the spot. What is the number one trait or characteristic you think would contribute to a student’s future motorsport success? If you could boil it all down…

Mike: That’s a great answer. That’s all I have. Thank you for the interview. Your answers were very, very… I don’t know how to explain it, in-depth. Fantastic answers, so I just want to thank you for being on!